'This is a sanctuary': Advocates unveil permanent memorial for Calgary's homeless

Jill Croteau GlobalNews.ca
October 13, 2021  6:15 pm
WATCH: A touching tribute Wednesday for Calgarians who have lost their lives living in homelessness. Jill Croteau reports, after years of advocating and planning, the city's first permanent homeless memorial has been unveiled.

A section of downtown Calgary’s 13th avenue has been transformed into a sacred space honouring the homeless.

After four years in the making, a unique memorial designed to pay tribute the the lives lost in homelessness has now been unveiled.

Nigel Kirk, who previously lived on the streets is now an advocate with the Calgary Homeless Foundations ‘Client Action Committee’.

He volunteered his time to see the project to completion, after losing many friends and people he affectionately refers to as his ‘street family’.

“I was homeless for a number of years, and when you’re on the streets you don’t forget the first person you lose,” Kirk said.

He hopes this project will inspire people walking by to be compassionate to the homeless community.

“This is a sanctuary for us.”

“We failed giving them dignity in life, and that this is the only thing we can do, at least on their passing, is give them this last dignity,” Kirk said.

Every part of the memorial is created with intentional design by artists with connections to the homeless community.

“We designed this bench so someone can lay down on it,” Kirk said. “We wanted to avoid hostile design.”

One monument is a sculpture of a backpack, a replica from someone who survived in homelessness for over a decade. 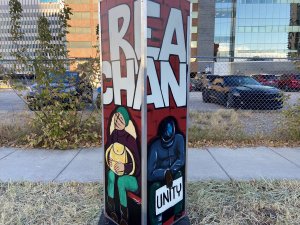 Dr. Jessica Shaw spearheaded the fundraising efforts to make the tribute possible. During her time in the faculty of social work at the University of Calgary she researched end-of-life care for people experiencing homelessness and interviewed many of them.

“Since we started this project in 2017 there have been 600 people who have passed away in Calgary.”

Sidney Gill also attended the ceremony. He used to be an Indigenous outreach worker and wanted to be a witness to the unveiling.

“When I close my eyes I can see individuals I knew. I can see Charles, I can see Erin, I can see Chelsea,” Gill said. “They are gone, taken too soon. They didn’t deserve to go.”