Rob Drinkwater The Canadian Press
September 19, 2021  7:29 pm
On Monday, new public health restrictions come into effect in Alberta. The province provided a way to show proof you've been vaccinated against COVID-19 on Sunday and says nearly 1,500 cards were generated every minute. While downloading it was easy for some, others have run into roadblocks. Nicole Stillger explains.

Albertans needing proof they’re vaccinated against COVID-19 were able to download cards from the province’s website on Sunday, but almost right away some residents said they were easily able to edit them.

Dan Shugar, who lives in Calgary, says the card was in a PDF file which he was able to edit to say his name was “Fakus McFakeFace” and that he’d received doses of “Ivermectin Horsey Paste” and “Bleach.”

He says all of the fields could be edited and making changes was “mindbogglingly easy.”

The government announced the availability of the cards in a news release on Sunday, a day before its “restrictions exemption program” launches. 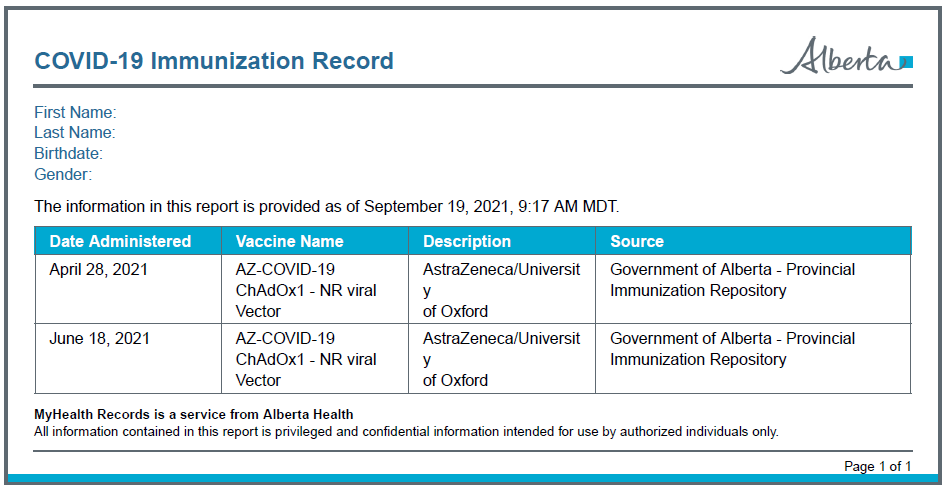 The program allows businesses and venues to operate without capacity limits and other public health measures if they require proof of vaccination or a negative test result from anyone entering.

Health ministry spokeswoman Amanda Krumins acknowledges in an email that “a motivated individual” can edit the PDF, but that “work continues on a more secure QR code that will be available in the coming weeks.”

“It’s important to point out that falsifying a health record is an offense under (the) Health Information Act,” Krumins wrote.

“That said, we know the vast majority of Albertans will use the system properly and adhere to the legal requirements set out in the current public health orders.”

Premier Jason Kenney had opposed a vaccine passport over what he said were privacy concerns, but said last week it has become a necessary measure to protect Alberta’s hospitals that face the prospect of being overwhelmed in the pandemic’s fourth wave.

Kenney said in a Facebook live video on Thursday night that since he announced the passport system, COVID-19 vaccine bookings have nearly tripled in the province.

Many people, however, reported difficulty in obtaining the required proof they’d been vaccinated in the days that followed the announcement.

Prior to the cards becoming available on Sunday, Albertans had the option of either showing sheets of paper they’d received when they got their shots, or signing up for a system that would allow them to view their vaccine records online.

The latter option required many people to sign up for a digital ID, and people who tried said they faced long, frustrating delays due to the system being overwhelmed.

The province says the new cards can be downloaded with an Alberta Health number, without the need for creating an online account and with minimal or no wait time.

It says Albertans will still be able to use their existing immunization records, including those received at their vaccination.