A group of river surfers is hoping dowtown revitalization could be the push needed to make its vision for a river surf park a reality. As Adam MacVicar reports, funding continues to be a hurdle.

A focus on downtown revitalization among public and private sector leaders in Calgary is giving a group of river surfers hope a vision years in the making could become reality.

The surfers can often be seen in the summer catching a ride on the naturally formed wave in the Bow River just below the 10th Street Bridge.

“It’s an obvious place to build something bigger and better.”

The Alberta River Surfing Association and the Alberta Whitewater Association have partnered to do a revitalization project of their own on the banks of the Bow and in the river itself.

The Calgary River Wave Park has been in the works for years and would include an adjustable wave, urban beach, new park and flood mitigation.

The ambitious project is estimated to cost $10 million and would sink a hydraulic platform under the water, which could be raised and lowered to adjust the size of the wave.

Using the current flow of the river, floaters would still have the option to bypass the manufactured waves. 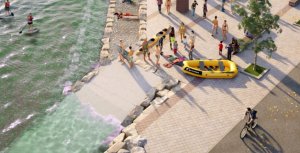 The group also hopes to build an area for rafters to get in and out of the river, as well as facilities to make the area more user-friendly.

“We already have a wonderful city and this is something that makes it even more unique,” Alberta River Surfing Association president Neil Egsgard said.

According to the group behind the project, the waves and urban beach are expected to generate between $2.2 million to $6.2 million per year in new economic spending, in an effort to draw in the wave tourism market; an industry which experts estimate generates $50 billion worldwide each year.

Newer plans for the area also include a pop-up park in a green space just south of the natural wave.

According to Egsgard, the park would be a COVID-safe community gathering space that showcases local breweries and businesses with an outdoor patio venue.

“A place for people to gather, enjoy the park space in Calgary, create vibrancy and a really beautiful area that connects people to the river,” Egsgard said.

However, funding continues to be a hurdle for the project.

The group behind the wave park is trying to raise $600,000 for preliminary engineering and has raised just $3,400 so far.

The group has already completed a feasibility study and an initial design report and has garnered support from the area’s community associations.

Now, as the City of Calgary enters the early stages of implementing its Downtown Strategy to revitalize and return investment to the core, there is renewed optimism the wave park could be part of that.

Ward 8 city councillor Evan Woolley said the city will be looking for projects that beautify the core and draw people to the area.

“Creating those active, dynamic outdoor spaces is a really important part of — never mind the city-wide recreation strategies that we have — but also the activating of our downtown,” Woolley said.

“Amenities and activating spaces exactly like this community proposal is exactly the kinds of things we want to see.”

Should it get the green light, the project is still many years away from completion.

“We don’t live in California, but we could have a little piece of it right here,” Holroyd said.