J.K. Rowling has refused to “bow down” to criticism of her recent tweets about the transgender community, doubling down and expanding on them by sharing her concerns about “new trans activism.”

The famed British author took to her personal website on Wednesday, sharing a lengthy blog post in response to the backlash triggered by her remarks — which members and supporters of the LGBTQ2 community have dubbed both “offensive” and “dismissive” since they were made last week.

“I refuse to bow down to a movement that I believe is doing demonstrable harm in seeking to erode ‘woman’ as a political and biological class and offering cover to predators like few before it,” Rowling wrote in her latest defence.

The Harry Potter mastermind also revealed that for more than 25 years, she’s been a domestic abuse and sexual assault survivor.

“I’m mentioning these things now not in an attempt to garner sympathy, but out of solidarity with the huge numbers of women who have histories like mine, who’ve been slurred as bigots for having concerns around single-sex spaces,” wrote Rowling, 54, explaining her reasoning for going public with her sexual assault story.

In response to Rowling’s remarks, however, some said the author’s history of abuse is not “relevant” to her transgender remarks and that she’s simply trying to “play victim” or “garner sympathy.”

The controversy began last Saturday when Rowling fired off a tweet after bristling at the headline of an opinion piece published by Devex, which reads: “Creating a more equal post-COVID-19 world for people who menstruate.”

“’People who menstruate,’” the Gloucestershire-born author tweeted in response. “I’m sure there used to be a word for those people. Someone help me out. Wumben? Wimpund? Woomud?”

Rowling has made repeated comments in the past conflating sex and gender.

However, according to the Canadian Institutes of Health Research, sex is based on biological attributes such as physical and physiological features, including chromosomes and reproductive organs, while gender “refers to the socially constructed roles, behaviours, expressions and identities of girls, women, boys, men and gender-diverse people.”

As a result of her public remarks, Rowling became the subject of major backlash — specifically from the trans community — with many social media users pointing out that people aren’t required to menstruate in order to be considered a woman, or vice versa.

“Ah yes, J.K. Rowling proving once again that she is transphobic and dismissive of trans people,” tweeted one user in response.

Following the widespread criticism, Rowling tried to explain to her fans that she never intended to offend the trans community. In followup Twitter posts, however, she continued to repeat that biological “sex is real.”

Rowling continued: “I know and love trans people, but erasing the concept of sex removes the ability of many to meaningfully discuss their lives.”

“My life has been shaped by being female. I do not believe it’s hateful to say so,” she concluded in another tweet.

Rowling’s characterization of biological sex and gender resulted in further backlash, however.

“Sex and gender are not the same thing,” replied one Twitter user. “Trans women face misogyny. The only erasure I see here is trans fem erasure.”

“Sex isn’t the same as gender, it’s not hard to understand,” tweeted another.

Rowling expanded on her “sex is real” thoughts in her essay on Wednesday, claiming that “new trans activism” is “pushing to erode the legal definition of sex and replace it with gender.”

“It’s been clear to me for a while that the new trans activism is having a significant impact on many of the causes I support,” she said, expressing concern that the movement would somehow affect a number of charities she has supported over the years that aid women and children in need ⁠— including her own, the Lumos Foundation.

One social media user suggested Rowling was simply using her charity work and claims of having “trans friends” merely to defend herself from backlash.

“Stop pretending to be a martyr,” they wrote on Twitter. “You don’t understand something. So you hate it. It’s a tale as old as time. You are the problem. Listing charities you give to isn’t changing that. It’s proof you gave to those for the recognition. Saying you have a trans friend to defend yourself.”

Watson, 30, who is best known for starring as Hermoine Granger in all eight Harry Potter films, took to Twitter a mere few hours after Rowling’s statement was published.

While she didn’t explicitly call out Rowling, the actor and social activist stood in solidarity with the trans community.

I want my trans followers to know that I and so many other people around the world see you, respect you and love you for who you are.

“I want my trans followers to know that I and so many other people around the world see you, respect you and love you for who you are.”

Radcliffe, Watson’s longtime co-star, addressed the controversy two days prior while also issuing an apology to members of the LGBTQ2 community for Rowling’s words.

“To all the people who now feel that their experience of the (Harry Potter) books has been tarnished or diminished, I am deeply sorry for the pain these comments have caused you,” Radcliffe, 30, wrote in his brief statement published on The Trevor Project‘s website on Monday.

Radcliffe reiterated his hopes that Rowling’s comments would “not taint” how readers perceive the Harry Potter stories.

“I really hope that you don’t entirely lose what was valuable in these stories to you,” he added.

Redmayne followed suit on Wednesday morning by speaking out against Rowling.

“I disagree with Jo’s comments,” Redmayne said, referring to Rowling. “Trans women are women, trans men are men and non-binary identities are valid.”

The 38-year-old continued: “I would never want to speak on behalf of the community but I do know that my dear transgender friends and colleagues are tired of this constant questioning of their identities, which all too often results in violence and abuse. They simply want to live their lives peacefully, and it’s time to let them do so.” 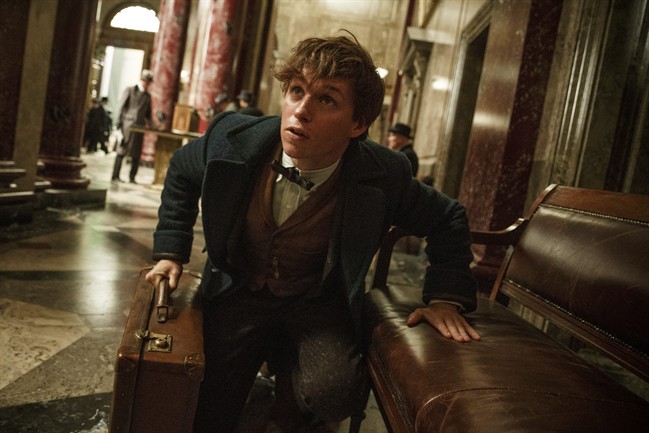 Even Warner Bros., the film production company behind the Wizarding World films, had something to say.

“The events in the last several weeks have firmed our resolve as a company to confront difficult societal issues,” a representative of the studio told Variety. “Warner Bros.’ position on inclusiveness is well established, and fostering a diverse and inclusive culture has never been more important to our company and to our audiences around the world.

“We deeply value the work of our storytellers who give so much of themselves in sharing their creations with us all. We recognize our responsibility to foster empathy and advocate understanding of all communities and all people, particularly those we work with and those we reach through our content.”

Towards the end of her blog post, Rowling referred back to her history of abuse, writing: “Like every other domestic abuse and sexual assault survivor I know, I feel nothing but empathy and solidarity with trans women who’ve been abused by men. Trans people need and deserve protection. Like women, they’re most likely to be killed by sexual partners.”

Though she expressed a desire for “trans women to be safe,” Rowling was open about her thoughts on gender-neutral bathrooms and how they could potentially “open the door” to violence.

“I want trans women to be safe,” she wrote on Wednesday. “At the same time, I do not want to make natal girls and women less safe.”

Rowling continued: “When you throw open the doors of bathrooms and changing rooms to any man who believes or feels he’s a woman, then you open the door to any and all men who wish to come inside. That is the simple truth.”

A 2018 study published by the Williams Institute at UCLA School of Law, however, shows there is no correlation between increasing violence or safety risks and transgender people being allowed to use washrooms that align with their gender identity.

“Sexual assault is not an excuse to be transphobic,” tweeted one outraged user in response. “F—k J.K. Rowling. She couldn’t even come out and apologize. (She’s) just trying to garner sympathy.”

— With files from the Associated Press